It’s almost Mardi Gras; and most years I venture down to New Orleans to partake in this break from reality. It can certainly be a time of debauchery, but I know a less-ribald version of the holiday and I want to encourage all who haven’t been to go.  It’ll do you some good.

So, why do I love Mardi Gras?  Let me count the ways:

1. Parades!  The floats are colorful, they throw things at you, and there are lots of bands. I love the bands the most, which are usually from surrounding Louisiana high schools, and include the cheerleaders and step teams. Night parades often include a troop of flambeaux, which are men who carry these gallon containers of propane on their backs to light the metal torches they carry.

2. Music! I get to mention this once again, because it’s not just the bands in the parade lines, but some of the floats who have music as well.  People all around you are dancing to whatever 2-minute snippet happens to pass by and it is truly glorious.  The music is often traditional New Orleans-style jazz, which is one of my favorites.  Then on Mardi Gras itself, there are outdoor concerts by the river playing all sorts of music.

3. My Birthday! Well, Mardi Gras typically happens during Birthday Week so I can pretend that they are throwing this big bash just for me!  And I get to eat more cake.

4. King Cake and other pastries down the street from the place I stay is a grocery store called Rouses.  They have good store-bought cakes.  Around the corner is a French bakery which serves the galette de rois, the French version of a King Cake. It’s all good. I eat it for breakfast and snacks.  I take bites throughout the day.  I made one at home last year since there was no Mardi Gras and it was all right, too. I also have Mardi Gras-themed petit fours and donuts when there, complete with a baby Jesus on top!

5.St. Anne’s Parade- the only time I’ve ventured into the French Quarter during Mardi Gras is on Fat Tuesday itself to see and be a part of this fun parade.  It’s not organized by any Krewe and there’s no entry fee.  You just come in costume or not and walk around the streets with your beverage and scope out the other people.  My group did an under the sea thing one year, and I was a jelly fish.  Another year, my partner was Rocky and I was a side of beef.  Hilarious.

6.  The Throws- these are the things people on the floats throw to us on the streets.  Sure, there are beads (and no exposure is necessary to get them where I hang), but there are also fun toys.  I’ve gotten glass beads, light-up frisbees, and plush animals.  But my favorite are the doubloons.  These tin coins are tossed out by horse-riding ostentatiously-costumed figures, making a delightful tinkling sound as they hit the streets.  I will scramble with the rest of the children to get mine! (It’s good to be small.)

7. Decorated Homes- The houses along St. Charles, the businesses on Magazine, the fences, the trees.  There are tricolor banners festooning most places.  Some trees are covered in beads, and they are truly beautiful.  I have considered making a Mardi Gras bead tree in my backyard.  I sure have enough beads to do it!

Are there things to not love about the party?  Sure. But for me, the fun far outweighs any bothersome smells or sights.  I could extoll the fun of this great ritual longer, but suffice it to say, I really want you all to go and enjoy it.  I hope I make it back next year! 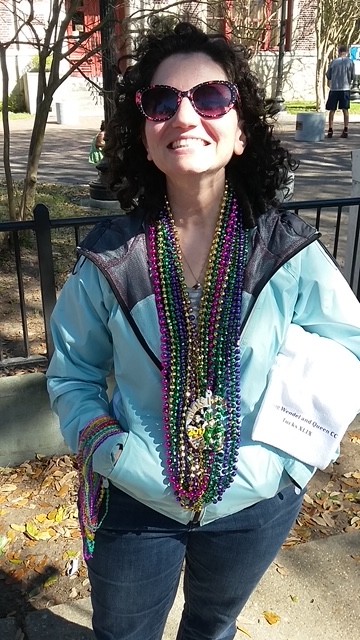