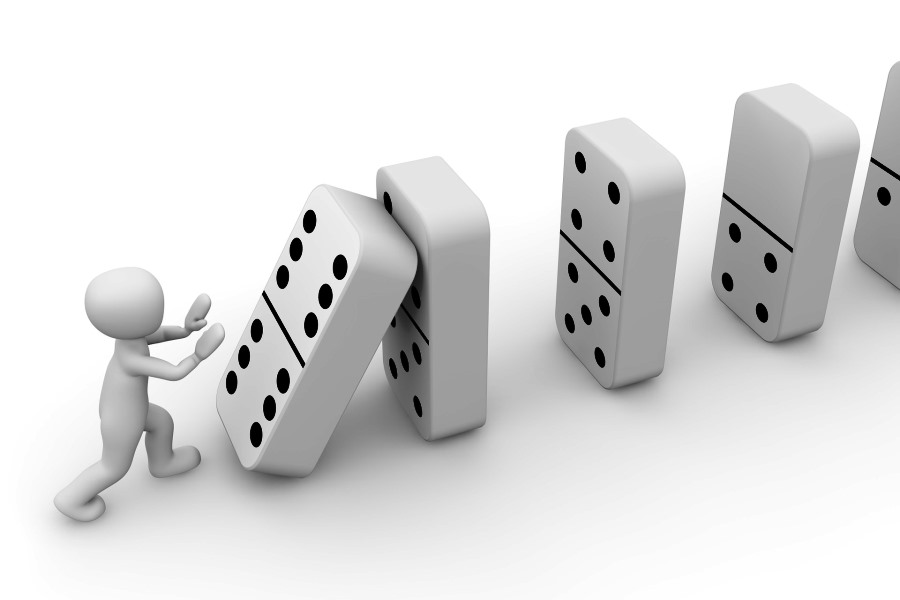 I know you’ve watched them. Video after video of people setting up a row of dominoes on the short end, and then using the gentle motion of one finger, setting them on their way tumbling into each other.  You have to space them apart just so or it won’t work with that precise fluidity that mesmerizes both young and old.

In US history, we talk about the Domino Effect, of which you also might be familiar. The theory basically claims that if we don’t stop Communism in Southeast Asia, then it will spread. This was justification for getting into Cambodia and Laos during the Vietnam Conflict.

I like dominoes as a game and have lost countless times in a game called Chicken Foot. But the dominoes I’m seeing in our buildings do not make me laugh like that game or capture my attention like the videos. No, the dominoes I see these days make me shake my head in frustrated incredulity like the Domino Effect did.

I’m still just worried about our teachers. They are making plans upon plans for virtual instruction and A/B scheduling. The district is getting closer to making a decision about in-person instruction after Spring Break, but we are antsy. It’s almost time for state testing, and making that schedule boggles my mind. In a high school, it was like a Where’s Waldo book with students moving in various directions at all times, class held in different rooms for a few days and a totally flipped schedule. It was tough to navigate for sure.

Then we had the snow storm, after the other snow storm. We’ve had pipes break and classrooms flood, so some schools can’t even do an A/B schedule right now. And that’s not the first time this year that weather has interrupted academics.

Did I mention we’re still in a global pandemic?

That brings its own set of dominos to fall.

Call them dominoes, call them unintended consequences, or tertiary events, one decision ripples outwards in ways we cannot foresee. We just have to find ways to continue doing the best we can when those ripples hit us, being gracious with how they affect our carefully laid plans.